The Search for the Perfect Place

My father very recently passed away, which albeit expected doesn't make it any easier.

He wished to be cremated and my family has asked that some of his ashes be taken to the Sierras and I'm the only one able to make the trip.  My father loved the Sierra's.  He was a Boy Scout leader and took my brother's troop on trips there and later started taking my sister and brother and a family friend, then finally after a whole bunch of whining and prodding, I was included - first to the San Gabriel Mountains and then a couple trips to the Sierra's.

Honestly, no one cares where I take the ashes including my Dad (perhaps especially him).  I could drive to the Sierra's, stop by a nice trailhead and dump them off, but of course the original inspiration for the suggestion was from the trips that he often talked about. But this isn't about him, it's about what I can live with for the rest of my life and the "where" really matters to me.  It mattered when I was distributing some of my dog's ashes and it really matters with my Dad's. It's a way of closure and the more effort I put into the process, the more at peace I will be.

But we are talking about the Sierra's here which is not always the most straightforward of destinations.  At first it was going to be really easy.  I have a Whitney trip coming up in July and I can easily take the ashes with me (it will only be some of the ashes so it won't be a huge deal bringing them.)  No problem right?

Leave it to me to over-think things.  Dad never climbed or even tried to climb Mt. Whitney even though a neighbor of ours did several times.  It was just never his thing I get the impression.  He went into the mountains to get away and the Mt. Whitney Main Trail is not the place to get away from people.  Ironically I don't mind people, I go into the mountains for the challenge and beauty of them and the people there usually don't bother me and are often welcome company.  In fact, if I'm hiking by myself having people around is a safety net of sorts - it's why Terri is ok with me going to Mt. Shasta by myself as you're never really completely by yourself.

But back to the issue at hand - making a simple task complicated.  So I'm thinking that Mt. Whitney may not be the ideal place.  My Dad was always looking for nice lakes to camp near.  Unlike me, he wasn't necessarily a climber.  He was much more into finding a nice spot to decompress.

So I'm thinking what lake?  Well there's no shortage of really nice lakes, but it has to be one with meaning.  The place that Dad spoke of over and over again was going over Kearsarge Pass (11,750') and then down into that area which has some lovely lakes like Bullfrog and Charlote Lakes.  Those would be just fine, but the trip that he talked about over and over again is the one didn't start at Kearsarge but from the West side via Bubb's Creek.  It was the time where he took us up a climber's trail (not a regularly maintained trail) into Gardiner Basin.  What made the trip memorable was not only the scenery, but his willingness to let me talk him into taking a "shortcut" up a mountain side.  We did not get all the way up and wound up spending the night on it.  In fairness, he did check this plan out with a ranger and the ranger thought it might be fun.  It was mostly a lesson for me in just how big mountains can be especially when you're 15 years old.

Here's the basic layout.  The actual trail is in pink and my shortcut is in red.  The plan was to get from Bubb's Creek to Charlotte Lake over night there and then go up into Gardiner Basin to the North.  We never made it that far and that's where we got to sleep with the Manzanitas. 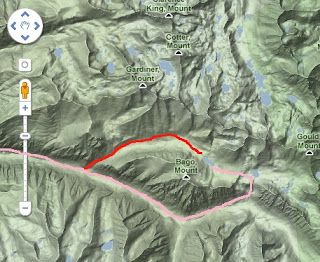 Then the next day we hiked up into Gardiner Basin which should have been hard and was, but was nothing compared to yesterday's misadventure, and that's where we landed for a couple of days.  Just fishing and messing around the lakes.  I wasn't a climber then so it's didn't occur to me to climb Mt Gardiner or Mt Cotter.  It sure would have now.

So the choice that immediately occurred to me was somewhere in Gardiner Basin, but I haven't been over there since and if I go into that area I likely would like to go see something else, so I vacillate.  What makes me hesitate is that it's two day trip and there are some gorgeous places that we (Terri will come along) will pass up to do it.

I think one solution I have for the moment is to go in via Kearsarge on the East side and camp at Charlotte Lake (if it's allowed, it's a popular place).  Then just climb over to Gardiner as a day trip and come back and then if we wish, we can go somewhere else like Rae Lakes or 60 Lake Basin since I've seen neither place.  But all this rigmarole seems a little silly as simply going to the gorgeous places would be more than fine.  And so I dither.  Fortunately unlike a Whitney trip I have some time to make up my mind.

Epilogue
My sister found some photos of a Kearsarge trip we took and that trip started in the Onion Valley.  Fortunately the Onion Valley is out of Independence which is just north of Lone Pine where Terri and I were going anyway.  So we wound up driving up to the Kearsarge pass trail head and walking 1/3 of a mile up the trail till we found this gorgeous spot similar to the photo which was just perfect and it didn't take a day of trekking to get there either.
Posted by Ellen at 11:59 PM

I waffle the same way. Maybe more. That's why I still have both dogs' ashes. although, thinking about it after the other night, I go a lot more interesting places with my current dogs than I did with my previous two. Too busy doing agility with the earlier two, I guess. The other thing I keep coming around to with the dogs, though, is "where did they most want to be? with me." And then I lose it. Sigh. But I have the same issue with my own ashes--where to tell people that they could go? Not out to sea, oh lord no thanks! After that--dunno. I understand that although it's completely disallowed, disneyland is rumored to be a favorite place.

Disneyland?! That would have never occurred to me.

As for me, I vacillate a lot. My life is split between the sea and the mountains. It's tempting to say Mt. Shasta Bunny Flat or Horse Camp (depending how mobile the person doing it was) and the bluffs overlooking the Pacific.