I have no issue with snowboarding personally.  It looks like a blast and I hope to learn it someday.

But I've never seen quite so many domestic arguments on the slope as I have over snowboarding.
The basic gist is unless you're a professional instructor/teacher: Don't try to teach a loved one snowboarding.

The usual scenario is guy wants to go snowboarding and talks his girlfriend into coming along.  "It's easy I'll teach you."  After about the 15th fall said girlfriend is more than a little miffed, dude just wants to go do some runs unencumbered, and there usually is a screaming argument.

That's the usual scenario, but I recently saw a father yelling at his young son over the same exact scenario, which I found particularly appalling.

This was at Sugarbowl who has a great instruction program for beginners of all ages.  There really isn't an excuse for this.

When you learn to be a teacher, you learn to have some distance (I speak from experience).  If someone you're teaching suddenly decides they hate what you're teaching, that has to be ok.  It's part of learning to be a teacher.   That distance is even harder to maintain when you are trying to teach someone you care about.  You can do it, but it takes effort and that's even if you already are familiar with the professional distance that a teacher or instructor has.  If you are tied up in the outcome then OMG you have already lost, and odds for a domestic meltdown are very good.

Do you and your family a favor and sign up your loved one up for lessons.  If you want to be involved, take the same class.
Posted by Ellen at 4:48 PM No comments:

My Skiing Date with Harry and Jerome

So I haven't been skiing much since my avalanche class last yesr
http://nondogblog.frap.org/2010/01/avalanch-course-pt-i-basic-overview.html

But it's been a year and I thought it was time to start back up on my ski training since I'm still stuck on the blues and want to be much better.  The day before I was supposed to go I suddenly found myself stressing about it and couldn't figure out why.  Then I remembered all the fun that I detail above.  But my anxiety mystified me as simply going skiing doesn't mean that I'm going to run into someone insisting that I do something that I'm not ready to do. Then I realized that I was going to take a lesson.  The second that I told myself that I didn't *have* to take a lesson, my stress evaporated.   It wasn't where I was going as I'm going to Sugarbowl which is a place I'm very familiar with and is not Squaw (the place of all the stress though it would likely be only stressful at very particular locations of Squaw if even that.

What was so anxiety producing was being in a position where others were depending on my to complete something I wasn't qualified to so.  For some reason, however silly, signing up for a group ski lesson was causing the same stress.  Never mind that they would just stick you in a different class if you needed it.  Totally irrational, but whatever.

But I've had a lot of lessons and I know what I need to work on.  Specifically my right turn.  If you look at my ski tracks it looks like a backwards 2.  Very nice smooth left turn and choppy abrupt right turn.  My left leg gets fatigued easier because my balance isn't quite right and I'm over using it.

So once I realized that all I needed was mileage I was suddenly ok and in the morning Harry Dresden the wizard (not Potter) and I took off for Sugarbowl.  The Dresden novels are by Jim Butcher and I get them via Audible.com.  Harry is a bit of a smart ass and is forever getting his butt kicked by some manevolent other world creature.  He's just as likable as Harry Potter, but older and has different angsts (what wizard doesn't angst).  Oh and the magic is really cool.  The only thing missing is Herminone. 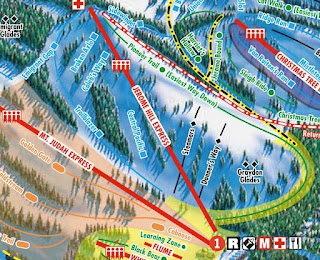 So today's project was to spend quality time with Jerome (Hill).  Jerome is a mostly intermediate area in Sugarbowl and there is a good variety in the blues that it has.  For the longest time in the past I would just go up the chairlift and down the main trail "Trailblazer." but there is a lot less traffic on the slightly harder."Broken Axel" and "Caleb's Way."  I haven't worked up the nerve to try "Central Pacific" and twice I've tried the backside "Sidewinder" trail and both times completely regretted it as there are some steep sections where I don't have time or the leg strength or the nerve to turn in time (it's kind of narrow too) and I go tumbling.  Oh and that "Pioneer Trail" green is green only until it starts to curve and then it gets scary steep for beginners.

And that's how I spent most of the day until my left quad got too tired.  Once that happens, my technique goes all south and there's really no point in continuing.  I think I'll do another day like this one and work up to Central Pacific and try to find a way down Sidewinder without being sideways.  One way is to hop the turn, but I really don't know how to do that well. 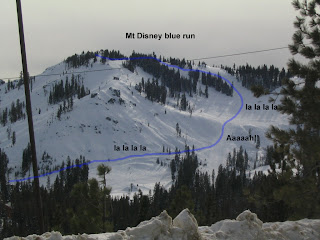 Then I could go back to Mt Lincoln (tougher blues that I've fallen on) or Mt Disney.  Mt Disney's blues have the fun aspect of leading you along and then dropping you off a steep section.  I talked about it here, but here is the photo again.  I know there has to be an easier way down, but haven't taken the time to find it.  It takes a while to get over to this part of the park so it's easier to just stay in once place and work on skills instead of investigating which is fun, but a different thing and I have easy access to Sugarbowl so it's not like I will never see it again (hopefully).
Posted by Ellen at 9:47 PM No comments:

I've noticed that nothing quite makes me seeth nearly as much as "I can't" - especially when we're talking about physical limitations.  Having trouble with what I thought was elevation just made me nuts.  I kept thinking that I should give up and do something more productive rather than going up to elevations that make me miserable on a regular basis.  But I never could just drop it and now that I've figured out that the issue is over-exertion and not necessarily elevation, I'm really glad I did.
Posted by Ellen at 10:09 PM 2 comments:

Verifying: My issue really is Over-Exertion and not Altitude

In October, I climber Mt. Hoffman to test out of theory that maybe I don't have altitude sensitivity at all.

And I go into a great bit of detail about it here:

On Black Friday (Day after Thanksgiving) I did go snowshoeing at Mt. Shasta just to verify this theory that it's not altitude at all but working at too high of a heart rate.  This is a trail I know well and I always seem to have trouble around 7200' to the point that I could tell you the elevation without having to look at my gps.  That day I climbed to 7600' before turning around due to the weather deteriorating, but I had my verification.  At no point in time did I hit the wall   I had to stop often to let my heart rate come back down as it would want to climb over 150 very easily, but doing so made it so that I could easily climb it with no energy taking leave of my muscles.

As I said in the previous post this is life changing and now I have something I can train for.  It was so frustrating when I thought it was elevation as there is no way to train for elevation - your only hope is aclimatization.  I'm quite proud that I stuck with trying to figure this out and that finally after 10 freaking years of working on this I finally see a way through it.

There is another point that I had been noticing is that if I'm magically dropped at a higher elevation, likes taking the cable car up to Squaw High Camp at 8000' I'm fine.  If I hike up to that level I often have trouble.  Noticing that was a big clue that altitude probably isn't the problem I thought it was.

I'm now working with a training on increasing my endurance, first by running and then incorporating spin and climbing.

The trouble is that I'm perfectly happy with my heart rate going over 85%.  I've the endorphin junkie and it's proving to be quite a challenge to learn how to work more at a maintainable level.  Even today I was letting my dog tow me up Mission Peak and my HR was 160-165 and I was fine for the 2 miles we were going up, but that isn't workable for very long.  In face even on Mission Peak I may have run out of energy at that rate.  I will be routinely repeating the climb without a dog encouraging me to charge, so I'll have to see how doable this is.

My dream is to be able to climb and keep up with a group.  If I can do that then I can climb Ranier and other Washington and Oregon Mtns and maybe even some Canadian and Alaska ones.

But first lets do Mission Peak at a normal HR.
Posted by Ellen at 9:08 PM No comments: