Shasta Revelation: I Don't Want to Do This by Myself

It's funny what it takes for something to FINALLY get through to me.  I'm in the final planning for a Mt. Shasta trip.  I'm going to have to spend a couple of days at altitude to see if I can adjust to the elevation more to see if my blood oxygen level increases to more acceptable levels. 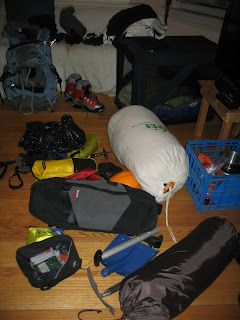 I've done these trips before both with and without other people.  The times I've been by myself I've been miserable at camp - missing Terri, missing my dogs.  I have a great time talking to people there at Horse Camp and higher, but when I am in camp I get lonely.  And after the trip, it's funny how quickly I forget that.  I've been planning this trip for a months  now and while this must have been in the back of my brain at the time I was completely committed to figuring out this altitude issue that I appear to have (low blood oxygen at altitude)  I get obsessed with the details and I forget but just now as I'm in the middle of putting everything together (see photo) - it hits me.  I don't want to go like this.  I want Terri with me.  Of course it's logistically too late for this trip so we're looking at next year but I'm amazed at just how blind I can be sometimes.

So Terri agree to go next year and I'm kicking myself for being SO dern slow at getting this.  Who knows I could change my mind again (not leaving for a couple of days) and I'll still go, but instead will likely ski or day climb, both of which don't answer my altitude questions.  We are going to Mt. Whitney in a couple of weeks so I'll get a chance to research it them.  But it's crazy making how conflicted I am about this.  I love climbing, but am unwilling to pay the price of time to make myself successful at it.

Good thing I'm not out of any money, but this is frustrating.
Posted by Ellen at 9:54 PM 1 comment:

I find I'm often writing about these types of scams over and over so I thought I'd write something I could refer to later.

It's very common to the point of passe' to get Pay Pal scams in email.  They're actually getting less common as they are kinda patently obvious, and people are getting wiser these days and scammers seem to have moved on to Facebook viruses and breaking into Yahoo accounts.  That said, there are always the Junior Scammers who are just getting their fingers going.

So in email, I receive something from allegedly from Pay Pal with the Subject line "Update your account"

Now first of all Pay Pal says they NEVER send this sort of request, but that's not the only thing.
Key elements of a scam are:
One thing way that you know Pay Pal or your bank is really who they say who they are is that they address you by your name.  When that is missing, with a bit of practice it's absence really sticks out.
Then the ominous tone becomes a joke.  If you're not sure about something then try doing nothing and see what happens.  If there's really a problem you'll get more email or even a phone call.

Then in these scams there is usually (almost always) a link for you to click on.  The link may say "PayPal," but it's actually going somewhere else.  You can try this link:  PayPal
After you click on it, come back and just hover the mouse over it.  You will see nowhereinparticular.com, which I assure you has nothing to do with PayPal.

So when you get one of these emails if it's not plainly obvious it's a scam, you can hover your mouse over the link to verify that it's not PayPal, though you have to be careful.  Bad guys sometimes name things paypal.badsite.com, which is just them naming one of their hosts "paypal."  The "paypal" has to be right before the ".com/" for it to be legit.
Posted by Ellen at 5:00 PM 1 comment:

After my father passed away my family decided to give me his Oximeter which is that small thingy (technical term) that they clip onto the end of your finger at the hospital or doctor's office to measure the percentage  of oxygen in your blood.  Given that I've struggled with getting enough oxygen at altitude, I've considered buying one before, but held off due to the $300 cost,  As a result, it's a sweet and much appreciated gift.

One of my hesitations about buying one was that I wasn't sure how much information out of it.  It's easy for me to justify the cost of a GPS as I know what to expect out of it and use one very, very often.  Knowing my blood O2 % was either going to be really revealing or really boring.

At sea level it's very boring which is what you want.  Normal readings are 90-100% below 90% is hypoxia and a potentially dangerous condition.  Hypoxia can make both pilots and mountaineers really stupid sometimes.  I live at a glorious 20' elevation so mine is 98-99% and other people around me often have 100% readings.

However when I drive up to nearly 7000' I now know that my oxygen level plummets to the 80's without a lot of help with pressure breathing.  I made a video testing this out at Bunny Flat on Mt Shasta:


The fact that I can at least temporarily fix it with pressure breathing is both good and bad news.  The problem is that the effects of pressure breathing are highly temporary, so you have to be willing to do it a lot,  The other problem is that this explains why I sometimes get sick when I sleep at 12,000' even when taking Diamox (a drug that increases your respiration rate).  When I sleep, my respiration level goes down and my oxygen level stays very low for too long.  What I don't know yet is if there's a way that I can adapt by spending a night or two at just below the altitude that I get ill.

It probably is the powers that be telling me that I have the wrong hobby and I should be doing more kayaking, sailing, and other sea level events.  I love kayaking and know how to sail and live near the water, but there's something about the mountains that calls out to me.  It may be that I am doomed not to climb super high (I don't climb well above a certain altitude which varies), but I have a new toy/tool and can gather a fair bit of information with it.

The next thing to do will be to drag my sorry butt up to Horse Camp at 7900' and hang there for a couple of days and see if my base level of blood oxygen changes.

Another thing I want to check on is how is my O2 level affected by exercise.  Is my leg dragging because of low oxygen?

This should be fun.  Besides it's the climbing season and it's gorgeous even if I'm not getting up super high.  I'm also learning to ski off piste and skiing in June is just glorious - note the crowds on Mt Shasta. 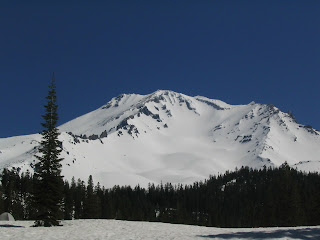 When the housing bubble finally burst (took long enough didn't it?) all of the predatory loan offers disappeared from my mailbox.  It was surprisingly sudden.  It's like they all went off to the Cayman Islands to open casinos or something.

Maybe it's a way of measuring that the market is recovering some, or that we didn't punish the perpetrators enough, but one substandard loan-sharky offer has finally reappeared in the mailbox.

Since this is more about how to read Fine Print that to pick on a particular company (even though they really do deserve it) I've taken the name out of the images.

So after some introductory statements trying to make things look legit which is just quoting stuff off of public record here is the body of the letter:

It clearly says "Lock in a fixed rate" and even uses the S-word: security.
And goes on to say that they have an A rating with the BBB (A+ being the best).  Sadly this is true.

Now (and this is the important part) skip to the bottom.  They have to say (in the finest print possible) what they are actually talking about:

"This is an offer for s new 5 year adjustable rate mortage." NOT a fixed rate.
and (OMG) "with an interest-only payment"

ARMs are not horrible (more info http://articles.moneycentral.msn.com/Banking/HomeFinancing/could-a-5-year-arm-save-you-money.aspx) it's fixed for 5 years (which is why they get to imply that it's a fixed rate loan), but after 5 years the rate then adjusts ever year.  If you're going to sell you house in under 10 years and if (big if) your house's value hasn't been over-inflated and is about to become unsellable for at least what you paid for it, then an ARM is not too awful, but what makes this particular loan fall into the Run Away category is the "interest-only."  Your payments are doing nothing, but making the lender rich.  And you have probably paid a fee to them as well for the privilege.
Posted by Ellen at 10:51 AM No comments: