I got a new job at UCSF March 2020 right at the beginning of the COVID pandemic. Between that and trying to make some progress on my second book, I've unfortunately been a little occupied and not blogging.

I've also really been trying to resist not getting too caught up in political blogging and concentrating my political observations to Facebook and Twitter - however much I want to shout from the rooftops: Q is just trolling you.

One of the more under-used aspects of smartphone photography is geo-tagging.

When a smartphone takes a photo, it writes the GPS latitude and longitude into the metadata of the photo. All you need is the means to view it. Then, if you wish, you can write the lat-long into Google Earth.

Why is this useful? Here's an example, my wife and I were on a hike on the Mt. Diablo Summit Trail and we had to turn around because of time constraints. We wanted to know how far we'd gotten. So I had her take a photo of me standing at the point where we turned around. 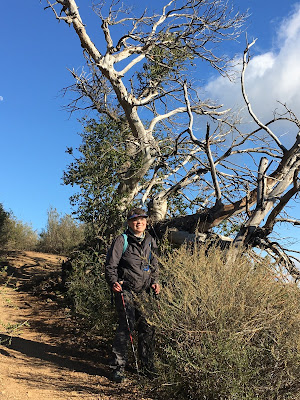 I work on Macs by preference, and I can look at the metadata of a photo by using the lowly, but very useful Preview. Open Tools-Show Inspector and click on the GPS tab and you will see the lat and long of where the photo was taken. There is even a handy map too (not shown).

Unfortunately, I don't know of a way to copy/paste from the inspector but hand typing these values is not impossible. I can tell you that the degree symbol on a Mac is typed using

The minutes and seconds are just apostrophes.

Armed with this knowledge, fire up Google Earth.

In the Google Earth Search window, enter your coordinates. Don't forget the directionals which in my case are N and W. Separate lat and long with a comma. You can also use the decimal versions of lat and long if you're rather.

Click Search and if the stars have aligned and you've typed in the correct coordinates, Google Earth will go right to where you were standing. 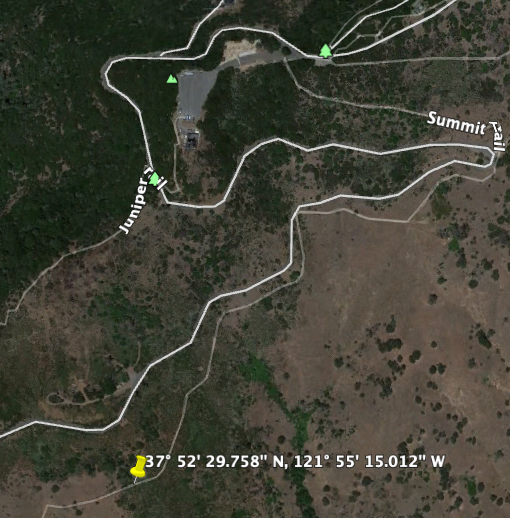 So we had a little ways to go, but we were within probably 30 minutes of the summit.

Now we have a future goal.

Now I hear all the Garmin people shouting: Just set a waypoint.

True. I was carrying a very old, but highly useful Garmin eTrex and I could have easily set a waypoint using. I also had it tracking me and when I downloaded the track to my desktop computer, I had the turn around point right there in Garmin BaseCamp, but I was interested in what happens if you don't have your Garmin with you. It's more likely you will have your phone with you, than your Garmin GPS and instead of kicking yourself for not bringing the GPS with you, you can always use the phone. This method works for anywhere there is cell service, you don't have to specifically be out hiking. Post COVID, I intend on trying this on the ferry.