Does everyone's parents keep weird stuff from their children's childhood?  For decades?

I was helping move my Mom into assisted living which mean going through a lot of stuff and sure enough there is the requisite one or two creepy boxes of stuff from when I was 10 or younger.  In said box was a plastic bag of sea shells with a note on it saying "Ellen's sea shells from St. Simon's Island (in Georgia).  While there was no date on it I haven't been to said Island to a long since sold (and now non-existent cottage) for well over 30 years.

So what do I do with a pile of sea shells?  There was a larger one that I abandoned on a rail at tourist laden Pier 39 in San Francisco (it was gone in minutes.)  But I also had a bunch of little tiny shells.

I could throw them away, but sea shells much like rocks are infinitely reusable.  There is always some wee sea creature looking for a home and anything that was once on them is long since dead so there's little risk of creating some pandemic ocean disease by carrying an East coast shell across the country and dropping it into the Pacific.

So I got my opportunity when I was at Pescadero Beach.  I hope some little critter had a nice home now. 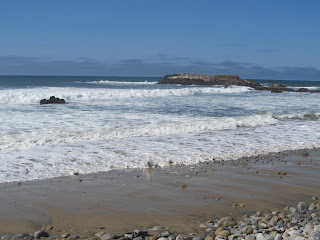 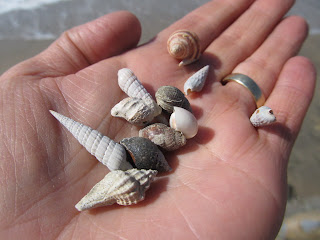 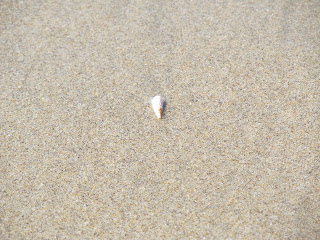