My "Son" the Ranch Hand

If it isn't entirely obvious I keep a (now 7 year) blog/diary about me training my dogs and all the unlikely places it's taken me, but this is more about me than them so it seems more appropriate to put it here.

Dog agility is a love of mine.  I really like the problem solving aspect of it and it's something I can do well.  One of my dogs I got with agility in mind, the other I got to manage the first dog and to maybe do agility. 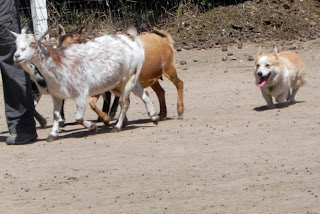 Well that was the plan.  Turns out that agility is not Dog #1's (whose name is Yoshi) passion at all and all the dogs crowding around kinda drive him a bit nuts.  The reason?  He's an order obsessed herding dog.  Unauthorized motion drives him crazy and an agility trial is full of such commotion.  All he wants to do is tell other animals what to do to the point of clamping on to them which is rather frowned upon by all of us.  He is very physically talented, and could have gone to any high powered agility school he wanted and done well (in fact for a while he was at one).  It took me months to figure out that all he really wanted to be was a Ranch Hand.  Yes, my son the Ranch Hand who is pictured here.

I'm realizing that there's a lesson in there somewhere.  You have a plan for a child or a pet of yours and it turns out that's not what is going to happen.  I'm used to the idea that children have to make their own choices, but I sort of thought that I'd have some power to dictate what my dog did and I do, but it's hard to see your dog stressed out and being a freaky boy about OMG there's a dog/cat/squirrel/etc moving, so I gave in and we both started to learn herding.

Herding is a very difficult thing for a dog to learn as the dog has to respect what the handler says, in particular, STOP moving when asked.  What this means is that we argue a lot which I first thought was not a good thing for our relationship, but then I started to notice how happy he was.  He's still a head case as he worries about not being able to control the stock and starts whizzing around in manic circles which doesn't make anyone happy (especially the sheep, though the goats aren't thrilled about it either), but we're learning and I find myself in a pasture stomping around in herbivore poop wondering how I got there.  I used to be a horse person so pastures are at least familiar, but this is still not where I was aspiring to.  I was more thinking the Agility National Championships.  This certainly isn't it, but I look at the photo and realize that he's right were he wants to be.

Ellen , I love your blog, your dedication is amazing!