Michelle Yu was on a training hike on Mt. San Antonio.  Her plan was to climb Mt. San Antonio then go East along the Devil's Backbone and then at the Baldy Notch take the ski lift down.

For reasons no one will know, but can pretty much be only explained by being lost in the fog/cloud, she didn't go East but instead confused everyone by going North towards Dawson Peak and fell into a very steep area called Fish Fork Canyon.

Her body was located at 7900' and the lowest elevation between Mt. San Antonio and Dawson Peak is 8600'.  At a minimum she fell 700' but she could have been much higher (like 9400' or even 9600' or even the summit though that seems a stretch).  Not surprisingly the cause of death was multiple blunt trauma.

This is a good lesson in how easy it is to be confused when you can't see the area around you.  This is a route Yu had taken many times in the past.  This is not a choice she intended to make as there wasn't any obvious discernible reason to go North.  I have been totally confused when I heard she was in Fish Fork Canyon as when I looked up where Fish Fork Canyon was it didn't have anything to do with where Yu was intending to go.  It took this photo from this KTLA video broadcast to really make it clear. 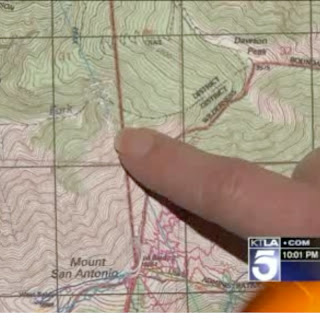 No wonder it took four days to find her.  Even if I had a dog with me who said the trail went North I probably would have assumed the dog was mistaken since I know the planned route was East.

This is one situation where a GPS is preferable to map and compass.  If you're in a white out a map and compass don't really help as you can't see other features to orient on.  However even a compass would have made a difference.
Posted by Ellen at 6:52 PM